The picture at the top of this page was taken at Becca’s wedding.  There is Aunt Kathy, mother Patty, and grandparents, Grandad and Ouma.

Web was my great great uncle.  He was born in New Hampshire in 1832.  In 1865 he moved his family back to New Hampshire and took up farming.  He kept a diary to record what he did on the farm.  These diaries also record all of his financial transactions.  These diaries give us a look into life in the 1800’s.  This is the next best thing to going back in time and sitting down with him to see what life was like at that time in history.

In this book I have shared his life in the year 1866.  I have used his other diaries and family stories to understand what he was saying in some of his entries. 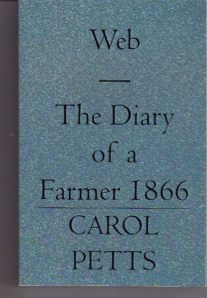 Buy this book on Amazon.com

From the book:’ July 14, 1866  Haying time was slipping by fast so Web got up at 4 a.m., got Fanny hitched up to the moving machine and set out to the fields behind the barn, before anyone else was up.

The boys took care of the morning chores and after breafast they hitched up Kate and Bill to the large hay wagon and they went to the field that Web and John had raked yesterday.

They worked all morning and got in all the hay that had been raked.  Web didn’t come home  for breakfast, and he didn’t come in midmorning.  Then Lydia noticed some bread and some of last night’s meat missing and she understood.  She would not see him until dinner and she stopped worrying.

Web did show up at noon.  The boys were already back and had put Kate and Bill away when they saw Web coming home.  They took Fanny and brushed her down.  Web went into the kitchen to wait for dinner.

After dinner, Lydia made the butter so Web and the boys could do the barn chores and go back to the field and finish with the hay.  They hitched Fanny to the hay rake and went to work.  John raked the hay into small piles.  Web and Frank followed behind the rake cocking the hay.

The cocks were about three feet high each and not too big around.  They must stand firm and sure.  Web showed Frank how to give each cock a slight kind of thatching, by drawing a few hands full of the hay from the bottom of the cock all round and laying it lightly upon the top with one of the ends hanging downwards.  They could then move on to make the next cock.  They must never be placed so closely together as to get heated up too much.  The hay is then out of danger from the weather unless a violent wind should arise.  In a day or two they will be so firm it would take a hurricane to blow them over.  They fishished the cocking and left the piles to sit for one or two weeks before being made into a large tramp-cock.

Frank took Fanny back to the barn, put her and the rake away, while Web and John hitched Kate and Bill to the wagon and went up to the meadow for one more load of hay before supper.  Frank started the afternoon chores, he worked until John and Web joined him.  The rest of the haying would have to wait until Monday.  Tomorrow was Sunday and Web had promised Lydia to take her to the meeting this week, they all needed a rest.

This gives you a little idea of how hard it is to read his writing.  He used a short stub of a pencil to write in his diary.