Nancy and I grew up almost as sisters.  Her mother and mine were sisters and she is only about 6 months older than I am so we were together on and off all our lives.  She reminded me of some of our time together this week and I thought I’d add some of her memories her also but first I need to add some back ground for those of you who are too old to understand what we had then.

Today kids need all kinds of talking or self moving toys in order to have fun playing out side.  In our day all we needed was a friend and some water.  Everything else we could find outside or pretend. Nancy reminded me of the mud pies we used to make and the day we made mud pies and threw them at the house next door,  We aimed at the pantry window, never dreaming we would hit it but we did and the mud went through the screen and into the pantry that Mrs Pitman had just cleaned.  We were both punished for that one but I don’t remember what the punishment was.  I used mud pies for many other things besides missiles.  Our back yard was all dirt as well as a large sand box so just a little water could turn into pies to bake in the sun, or bricks to dry in the sun, or great things to throw in the lake in front of the house.

This is a  picture of my brother and myself in the corner of the house next to the back door step.  He didn’t play with me too much as he was two years older than I was and a boy so he had his own friends and that did not include a little sister.  Here we borrowed mother’s broom and that made a perfect house to pay in.  You can see the water spigot just behind my brother so with water handy and a dirt floor to sweep the rest could be supplied with a little imagination.  Mother never complained when I got her broom so full of dirt, I bet she had to wash it well before she could use it on her floors.  I think she was just glad we were out side and not in the house turning all the chairs into airplanes.

They lived in Harrisville on and off in the early years.  Aunt Ruth worked at Mrs Bergeron’s for a while.  Mrs. Bergeron was the local telephone company.  All calls went through the switch board in Mrs. Bergeron’s room that sat between her kitchen and the icing room.   Aunt Ruth was the switchboard operator for a while and we went with her sometimes, then we would take sticks, a cardboard box and string and set up our own switchboard and play telephone operator for hours at a time.

When Nancy was old enough to go to school ,  Aunt Ruth moved to Troy where she had lived as a young girl and where her parents still lived and became a teach.  She taught second grade there until she retired.  This is one of her school pictures.  They live for a while with her parents, later in the down stairs apartment owned by Mere, her step grand mother.  That used to be a store owned by her grand father Brown and still had a cobbler’s shop in the basement.  It was right on the square.  Later she moved into an apartment at the foot of the square owned by Miss Brown, no relation.  Miss Brown was also a teacher but taught the older children.  I think it was High School but could not be sure.  She was a little bit of a woman and they say he never raised her voice and never lost control of the class no matter how many troublemakers she had in her class.  She was just  always in control and very much loved.   I used to visit there often when we were in Grammar School.  We liked to sit in the park and copy down license plate numbers, hoping to find two alike.  In Harrisville you could have sat all day and never seen a car drive by so Troy, right on the square seemed like a big city to me. 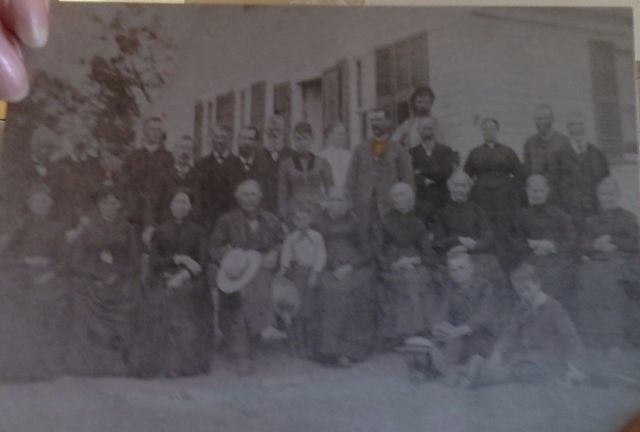 This is the Brown family reunion.  my grand father is the young boy sitting on the ground with his hands clasped around his knees.  This is the same house where Aunt Ruth and my mother grew up.

Now I need to find a picture of Nancy and when Nancy sends me some more stories I’ll add them.