We have moved 14 times since Norman got out of the navy and each time I have to weed out the things I had collected.  It seems we always went from a very large place to a small one or the other way around.  So when we went from a large house to a small one I had to give away half of my things.  That is why if you walked into Kathy’s house when she lived in Peterborough it was just like walking into my house as so many of the family pieces I had went to her to furnish her house.  The same was true of Patty’s house and this last move a whole moving van of things went to Joe’s house.  I had collected family pieces from  Auntie Thayer, my grandmother, from my mother, Norman’s mother and both of his grandmothers.  We very seldom bought new furniture.  Even Shanti in New Mexico has some of the family pieces.  We had collected so many things they had become a mill stone around everyone’s neck.  It is hard to toss out anything that has been in the family for over a hundred years but after a while you long for something new and shiny.  When we moved from Florida to Georgia we gave a picture of my father and his brother to Patty.  It looked great in her house but now that Becca has moved back in with her three little ones they needed the room for more up to date things and I begged to have the picture back.  Thank goodness she gave it to me yesterday and Norman put it up on the wall for me. 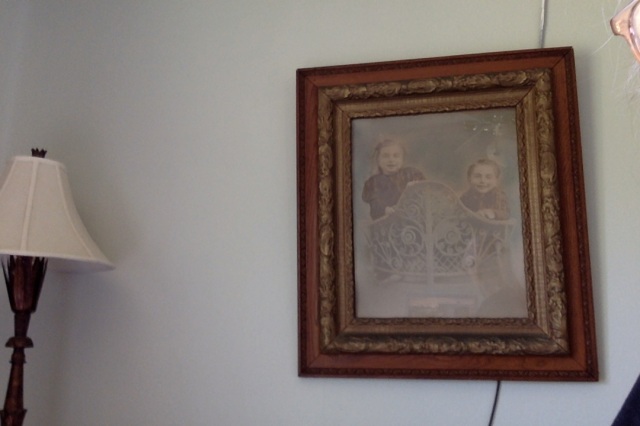 As you can see it is very large.  But it is beautiful and the history behind it is so dear to my heart I am thrilled to have it back on my wall.  It will stay with me now until I die and then I hope someone will take it and love it as I have.  This picture was taken in 1900.  The two boys are my father on the right and Uncle Bing on the left.  Their parents were Hattie and Ernest Thayer who lived on North Main St in Haverhill, NH in Uncle Web’s house.  Uncle Web and Aunt Lydia had three boys of their own but none lived beyond 3 years of age so when Lydia’s sister Addie died leaving five children, they had Hattie come live with them to be a companion for Lydia.  She became the daughter they never had.  Uncle Web loved her as he would his own daughter and when Lydia died Hattie remained with Web and took care of him.  So when Hattie and Ernest married they lived on with Uncle Web.  In 1900 Ernest had a chance to buy the store he had been working in for two years and with Uncle Web’s help he bought the store.  This picture was taken to put on the new calendar for 1901.  Hattie and Ernest had just lost their third son, Leslie.  Hattie had to let Ernest cut Guy’s hair for this picture as he did not want a picture of his eldest son wearing long curls.  Hattie agreed to cut his hair because she wanted the picture so badly.  She saved his curls and I have one in my dream catcher. 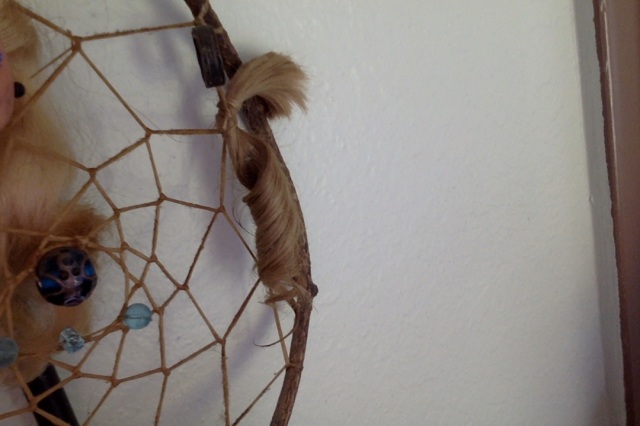 As you can see I have collected all kinds of things and that curl is now 116 years old.  I am sure Hattie would never had any idea it would still be in the family in 2016!! Anyways Uncle Web borrowed money on his house to help Ernest buy the store and five years later they went bankrupt and Web lost his house.  In that five years Hattie had two more children and then died of TB.  Her sister, Mary Jane had 20 children in all and Hattie could not see why she could not have all the children she wanted but she was not as strong as Mary Jane and TB finally claimed her in 1904 as well as her last child born just a week or so before her death.  Hattie’s younger sister came to live in the house to care for Hattie’s family and raise the three living children, Guy, Herman, and Angie.  This picture hung in Web’s house until they moved to Harrisville, NH in 1905.   Once in Harrisville I am not sure if the picture hung in Auntie’s house or not but it did stay with the family and when Herman married and set up his own home he took the picture with him.  Years later when I went back to college to get my teaching degree Uncle Herman,(Uncle Bing as he was lovingly known) and Aunt Emma helped take care of Patty while I was in school.  When Uncle Bing died Aunt Emma showed me this picture and asked if it was anything I would like to have.  I fell in love with it on sight and brought it home.  We had a very small house and everyone said it was much to large to hang up but we did and it looked right at home.  In 1963 we built a new house in Peterborough and everyone said,” That picture would not go with a new house”  but we took it, hung it up and it looked right at home.  We moved it to the farm in Peterborough next and it looked right at home in a hundred year old house.  Our next stop was in a new condo and even when this picture took up the whole dinning room wall it still looked as if it had been made for that spot.  The picture moved to Florida with us.  It moved from pillar to post with us through a large house out on the island, to a rental, and finally to a mobile home in Spanish Lakes.  It was when we moved to Georgia that we asked Patty if she would like the picture and she said yes and it has stayed with her until this week when she gave it back to me.  My most beloved family piece. 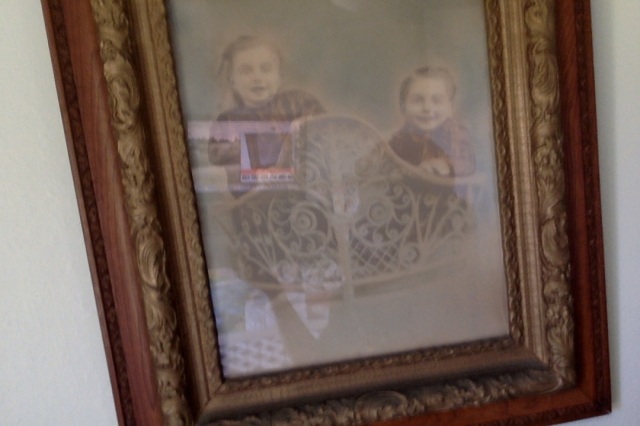 Here is a closer look so you can see the boys better.  It is from my father I get my shape.  Both he and his brother were built just alike.  The Thayer/Young genes are very strong and have carried down to Becca’s  two boys..  Colby looks just like his father but James is a Thayer.  He looks just like my son and my brother.

So there you have the story of a 116 year old picture that is finally back home with me. To stay this time!!  I do have a few things like this that I will hate to leave when I go but no worry, I’ll enjoy them while I can.  Have a great day.

I am a retired teacher. I have taught all levels from kindergarten through college and have been retired now for over 20 years. The last ten years we have lived on a farm and lived off the land, growing our own food and canning for our extended family. Now we have sold the farm and are moving to Florida to truly retire. I guess I have always had a short attention span as this is our 11th move. We have moved from a small farm in New Hampshire, to more city type living, small business adventures, focusing more on traveling, Florida living, Georgia, and Tennessee farming and now back to Florida. My blog is a way to keep my children up to date on what I am doing and letting them know I am still alive and well. My children are spread across the country from New England to Florida, Nova Scotia to New Mexico and CA and several places between, They let me know what they are up to by commenting on my blog but they are so busy with their own lives most times I have to assume " no news is good news". Now I are starting on a new adventure so will try to give daily updates until we get settled into a routine. Then I know even if I am getting older and should settle down I will start looking for some new and exciting adventure to start. Welcome aboard. Norman died Oct 30, 2017 so I am continuing the journey alone with the aid of my children, grand children and great grand children. At present I am living with my daughter and we are 7 in one house and cover four generations. We range in age from 7 to 85 and are finding common ground, we are living proof that multi generations can live and function in a three bedroom house if they really want to. Soon my grandson will have his house built next door so we all will have a room of their own except for the seven year old twins who by choice will share a room.
View all posts by Carol (Ouma) Petts →
This entry was posted in family, Uncategorized and tagged family ties, Guy and Bing, picture. Bookmark the permalink.